Miscellaneous names, notes and references regarding the Village of Holmesville (taken from various sources)

Remembering Daniel Bestor Hudson on the 100th Anniversary of his Death

The life and times of D.B. Hudson, like the past generations of our ancestors, are practically lost to the years and their legacies are barely remembered by their own families and even less by others.  D.B. Hudson is among the many that fall in this category.  Nevertheless, he has always been remembered as a pioneering leader in our family and this is why I am thinking about him today, a century after his death.
One hundred years ago, my great-grandfather D.B. Hudson of Eola died.  His death notice was as follows: Died, At Eola, La., on Wednesday morning, February 28th, 1917, at 6 o’clock a. m., D.B. HUDSON, aged 75 years.  Funeral services will be held at his house, Thursday morning, March 1st, at 8:30 a.m. Interment in Evergreen Cemetery. Friends and relatives are invited.
​
From the accounts that his daughters (my grand mother, Anne Virginia Hudson LaFleur - and my four grand aunts - Myra, Bessie, Josie and Julia Hudson) related to me during the 1940’s to the early1960’s, their father was a man of judgment, integrity and sound practical sense.
​
Along with my father, Edwin G. LaFleur, they described him as an accomplished man who made a difference in whatever venture he pursued. They also recalled him as having high social qualities and living an eventful life that was linked with noteworthy successes and intermittent periods of profound grief. He was particularly admired for being deeply devoted to his religion, and upon moving his family from Evergreen to Holmesville in 1878, their attendance continued every Sunday at the Bayou Rouge Baptist Church.

​In commemorating the 100th anniversary of his death, I would like to list a few milestones and associated comments to honor his remembrance.

D.B. Hudson was born on March 2, 1842 and reared in Lowndes County, Mississippi.  In 1861, at 19 years of age, he enlisted in Company A, Thirteenth Mississippi Infantry, (Winston Guards) and was in General Lee’s army, serving until the surrender.(1)  He fought in a number of battles of the war, was badly wounded (shot through the chest) at Gettysburg and was saved by his brother, James Hudson.  Together, they walked approximately 900 miles back to their home in Lowndes County, Mississippi in order for D.B. to heal.(2)

Upon recovering, D.B. married Miss Laura Carr McMakin, a native of Spartanburg, South Carolina, on January 12, 1864.  When he was well again, he rejoined Company A the next spring, remaining with General Lee until the close of the war on April 9, 1865.  He was taken prisoner three days before Lee’s surrender and was held until July 1865 before being released.(3)  He returned to Mississippi, remained there until 1870, and then moved his family to Evergreen, Louisiana at age 28, where his brother, James, had relocated from Lowndes County, Mississippi in 1868.4)

He lived the next 47 years of his life in Avoyelles Parish (Evergreen, Holmesville and Eola). At Evergreen, D.B. Hudson worked as a clerk in a mercantile establishment before starting his own mercantile business.  In addition, he was active in church and community events by being the first Treasurer of the Bayou Rouge Baptist Church and serving on the Evergreen Town Council.  Act 61 of the 1872 Louisiana Legislature provided for a new corporation styled “Evergreen”: “Take a point in the center of Hill Street, in front of the residence of D.B. Hudson and from this point, to include and comprise one mile square, was to be that set apart for the village”.  Because of his prominence in Evergreen and the natural affinity he had with its’ citizens, he was given the grave plot in the Evergreen Cemetery that was nearest to the Bayou Rouge Baptist Church. Often, on Sundays, Mr. and Mrs. Henry Clay Kemper would invite the Hudson’s to their Oakwold Plantation home in Evergreen. The Hudson’s cemented this friendship by naming their next daughter, Anne Virginia, (my Dad’s Mom) 9/15/1871, after Mrs. Kemper.(5)

In 1878, D.B. and his family moved to Holmesville in Southwest Avoyelles Parish where he continued his general merchant business and became postmaster in 1880.

In 1881,when the new Morgan Railroad bypassed Holmesville by one mile, D.B. moved to newly established Eola next to the railroad.(6)  He built a large house and an equally large general store.  At the same time that D.B. and his family moved to Eola to start over again, he initiated correspondence with the Topographer of the Post Office Department, Giles A. Smith, to relocate the Holmesville post office to Eola. The move was approved on Nov. 11, 1881, and the post office location name changed from Holmesville to “Eola” on Nov. 14, 1881.(7)  It was located in the new Hudson General Merchant Store and D.B. Hudson became the first postmaster at Eola.
Eola became his permanent residence. He was postmaster from 1880-1884 and again from 1888-1896. He served as Postmaster until being elected to the Louisiana Legislature from 1884 to 1888 and also from 1896-1900.  He was recognized for being elected twice to the Louisiana Legislature by being named posthumously Avoyellean of the Year for 1896 by The Greater Avoyelles Journal.(8) He was in the mercantile business for 39 years at Holmesvlle and Eola (1878-1917). (When he died in 1917, his son, George B. Hudson, became Postmaster and held the position for 42 years from 1896-1938 while also continuing the Hudson general store business trade in Eola.  Upon his death in 1938, the Hudson store closed).

While he achieved both financial and political acclaim, he also shared the deepness of personal grief within his family. Of the 14 children born to D.B. Hudson and Laura Carr McMakin, only 7 lived beyond age 22. In the 7 years from 1878-1885, 5 of their children, William Scott (1), Lewis (3), James Lansdell (8), Hannah (1) and Mary (19), died.  All are buried at the Evergreen Cemetery.(9)

During the 1950’s, I regularly visited an elderly gentleman who was closely acquainted with D.B. Hudson – and he often remarked that when D.B. Hudson walked into a room everyone would stand up in their respect for him and within a couple of minutes, they would gather around him and listen to what he had to say.(10)

Once, in the early 1940’s while visiting his daughter Josie Hudson on Christmas Day, as was the family custom for many years - she was born in the Hudson home and lived there all the 80 years of her life - I walked alone into the large dining room (first door on the right upon entering the great hall of the Hudson home) and seated myself in the head chair at the magnificent dining table. I remember that it was a chair too large for a small boy, but I sensed a touch of nobility sitting at the same place where Daniel Hudson once presided over his family and friends.

Since I reside outside of Louisiana, (Maryland) I do not visit Bunkie and Avoyelles Parish as frequently as I would like.  However, when I do visit, the Evergreen Cemetery is always first and foremost on my agenda. It is a beautiful cemetery -- abound with giant magnolia, holly, hickory, and cedar trees – just as is the quiet beauty of the Bayou Rouge Baptist Church. The Hudson family burial place is a distance of only fifty steps from the front of the Church.  While walking these few steps, I try to replicate - to look back – to trace D.B. Hudson’s own footsteps and contemplate his thoughts while being among the many soldiers, just like him, who faced the trauma of being on the Civil War battlefield while still a teenager and in his early 20’s; I see him being injured and walking approximately 900 miles back to his home in Mississippi - and returning to the battlefield upon recovering; I see him arriving in Evergreen with his family to begin a new life at age 28; and, as I approach the Hudson burial site containing several small-sized tombs, I sadly visualize him again, surrounded by his family and accompanied with the desolate sorrow and the heartbreaking memory of burying 5 of his children in a span of only 7 years; I see him again - in the State Capitol at Baton Rouge as a legislator from Eola, in Southwest Avoyelles Parish as the people’s elected representative, not once, but twice, from that district; and, I see him once more, happily mingling among those that stopped by his large general store in Eola, during later years of his life.  These are the reflections that instinctively capture my thoughts while standing by his gravesite in Evergreen.

In recalling the observations expressed about him from the Hudson family and my father, I would say that he is the personification of a truly Great-Grandfather – both in stature and in family perspectives.
Today, we celebrate his memory and the honorable qualities he demonstrated in his personal and professional life – qualities that have continued to be held in high esteem.
We honor him for being the patriarch who faithfully led his family during their heartfelt moments of unmeasured sadness. 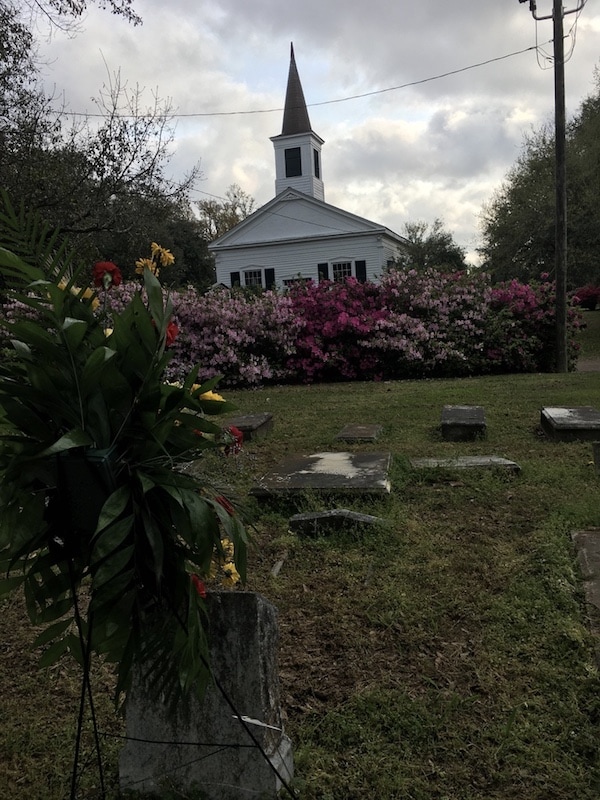 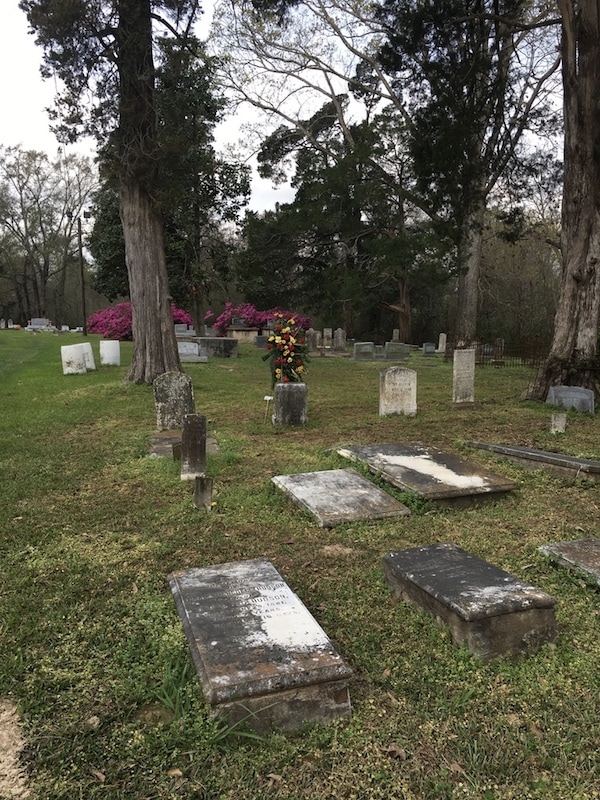 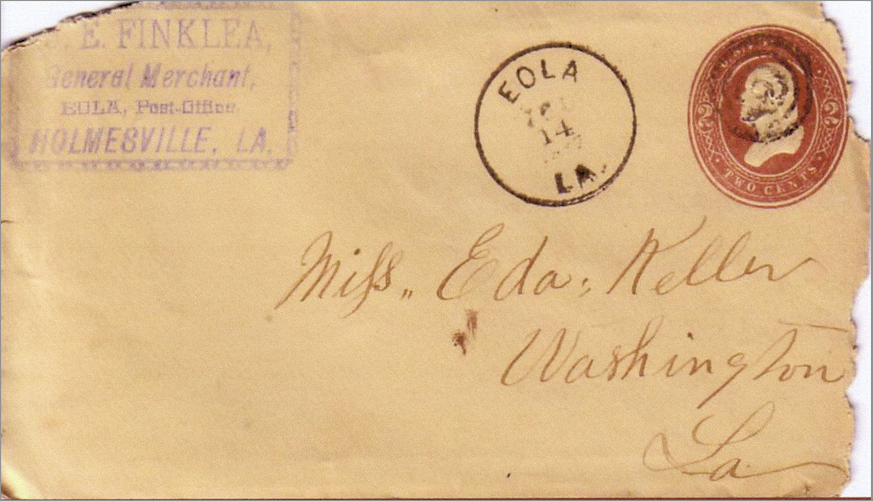 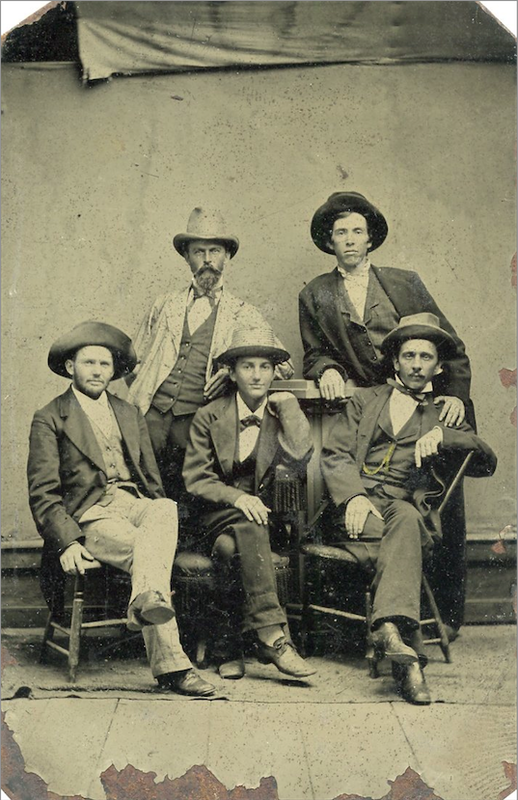 Unknown Individuals.  This tin photo was found among the rubble that was in the attic of the “Old Holmesville Home” where my family lived from 1931-1950.
Back To Top