A village in Avoyelles Parish that thrived from 1830-1881.  By Jerry LaFleur.

Map with the Geographical locations of Holmesville, Eola, Bunkie, & the home sites of Edwin Epps and Rezin Bowie along Bayou Boeuf 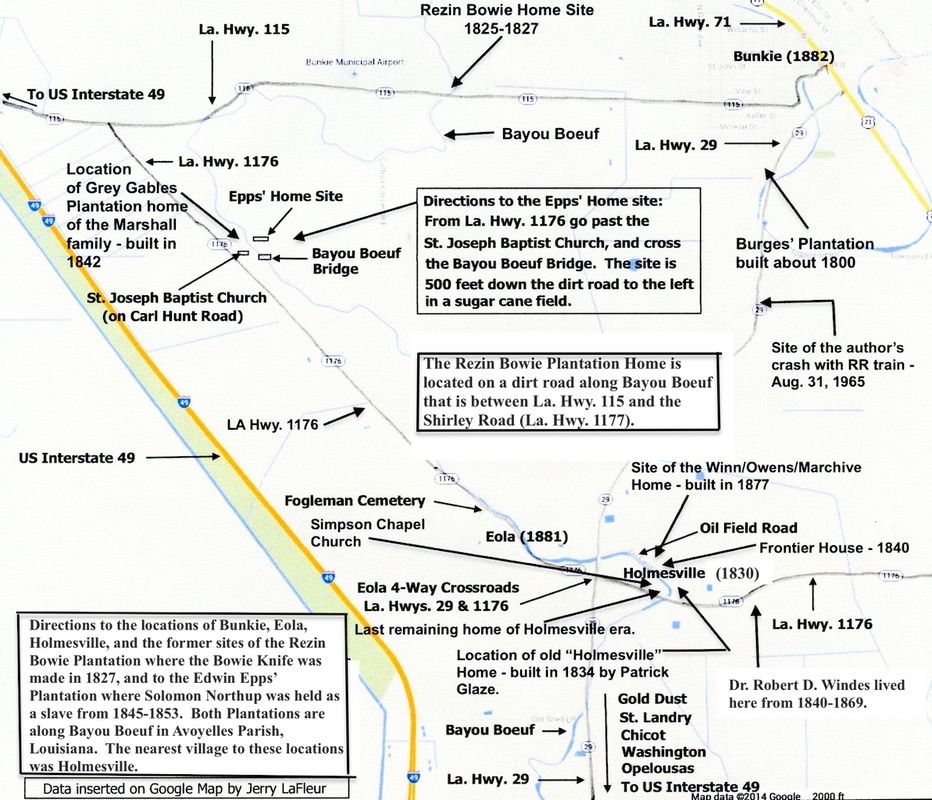 This website is about the Holmesville era that existed from 1830 to 1881.  Several old maps are included as are some photos of a few old homes that were demolished due to decay and neglect.  Holmesville thrived as small village in the Southwestern corner of Avoyelles Parish from 1830 – 1881.  It was located in the general area where the Watermelon Bayou flows into Bayou Boeuf.  Prior to 1830 the area was known as “Bayou Boeuf Village”, or simply “Bayou Boeuf”.  It extended three to four miles from Holmesville and included the Edwin Epps home site, along with the Rezin Bowie home site that was near the Rapides Parish Line to the East, and to the Windes Plantation in the West.  In 1881, when the Louisiana and Texas Railroad by-passed Holmesville, one mile to the north, a new village, Eola, was established to be near the railroad.  Subsequently, when the Holmesville Post Office was re-located to Eola (also in 1881), Holmesville gradually ceased to exist.  Holmesville reached its zenith in the several years preceding the Civil War.  There were several plantations, steamboat transportation, two or three physicians and several stores as well as saloons.

The sources of information for this website are taken from the Marksville Villager Newspaper (Randy DeCuir); The History of Avoyelles Parish by Corinne Saucier that was published in 1943; and from the early Avoyelles Parish Police Jury Papers.  Also the Post Office Department, Office of the Topographer, provided some information, particularly regarding the early Postmasters of Holmesville.  L. F. Marchive, former Postmaster, Bunkie, LA., for obtaining information from the Post Office Department, Office of the Topographer, regarding the dates of closings and re-openings of the Holmesville Post Office -  including the name change to Eola on Nov. 14, 1881.  An outstanding and invaluable source of information was Solomon Northup’s Twelve Years a Slave, as superbly edited, researched and published by LSU professor Dr. Sue Eakin and historian Joseph Logsdon, a professor at the University of New Orleans.  Additionally, The Windes of Bayou Chicot and Holmesville, Louisiana (George Windes).  "Recollections”, by the authors father, Edwin G. LaFleur, was an excellent source of factual information.  Biographical and Historical Memories of Northwest Louisiana, p. 637 - History of Avoyelles Parish;  Our Hudson Heritage, p.102 - Compiled by Lonita Ayers Stamps and Weldon Isaac Hudson; Indexed by Ray Hudson.1980.  Avoyelles Abstracts and Land Company, and the Amerada Oil Company Abstracts (1939).  Papers and photos from the collection of Gladys Sandefer regarding the Bayou Boeuf barge named Little Store, LA, and for the ”Louisiana Cemeteries" photo of the Fogleman Cemetery.  “The Lord and Fogleman Families” by Clyde W. Lord. Chapter 2. page 27.  Theresa Milburn, for her Diary, “Scribbling”, that she wrote from August 1863 to May 1865.  The Old Evergreen Burying Ground by Porter & Barbra Wright.  Arthur W. Hyatt Papers, Mss. 180, Louisiana and Lower Mississippi Valley Collections, LSU Libraries, Baton Rouge, Louisiana.  Stuart Salling, Louisiana Civil War historian, (Burges’ Plantation/Civil War).  Germain Bienvenu, LSU Libraries, Public Services, Special Collections.  Garland Forman, Editor, Bunkie Record, for his excellent response in printing articles sent to the Bunkie Record.
​
Taken together, these documents provide some information about the general Holmesville area, a small village that has for all practical purposes completely disappeared.  For myself, I have always been interested in places of birth of everyday people and the history of those places.  That is my underlying interest in having this website.  I just believe that no place should ever be forgotten.  My birthplace, in Holmesville, (now Eola) was at an old house located at the place where the Watermelon Bayou flows into Bayou Boeuf.  This website is primarily about Holmesville as it was from its beginnings in the early 1800’s to 1881.  In 1881, when a new railroad was built a mile east of Holmesville, some of the populace, along with the Post Office, moved to this new village, named Eola.  Thus, the name Holmesville phased out while Eola phased in.

Probably no other location in Avoyelles Parish has been re-named three times:  "Bayou Boeuf", (1800 - 1830); "Holmesville" (1830 - 1881); and "Eola" (1881 - present), are generally one and the same place and location.  As such, it's easy to understand why people are often confused when discussing the events that transpired in either "Bayou Boeuf", "Holmesville" or "Eola" when these places and locations, at different periods of time, were/are one and the same place. So, if you are looking for Holmesville today, then look on the map and find "Eola".  In the four miles radius of Eola were the former locations of the Dr. Windes Plantation, at the headwaters of the Watermelon Bayou on La. Hwy 1176; the Edwin Epps’ farm/house on Bayou Boeuf and La. Hwy 1176, and the Rezin Bowie Plantation on Bayou Boeuf along the dirt road between La. Hwy 115 and Shirley Road (La. Hwy 1177).

The impact of the Academy Award winning movie, 12 Years a Slave, has provided abundant literary and media publicity for Louisiana, Avoyelles Parish, and particularly, Bunkie.  Holmesville, the village nearest the actual place of the Solomon Northup enslavement, at the Edwin Epps home/farm from 1845-1853, is approximately four miles south of Bunkie.

I believe it is important and historically worthwhile to give the public and readers of this website a glimpse of the Holmesville that was once a bustling small village and the place that was mentioned several times in Solomon Northup's book, Twelve Years a Slave. Additionally, this website pinpoints the exact location of the Edwin Epps' farm and the place where Rezin Bowie lived on Bayou Boeuf and its proximity to the village of Holmesville.